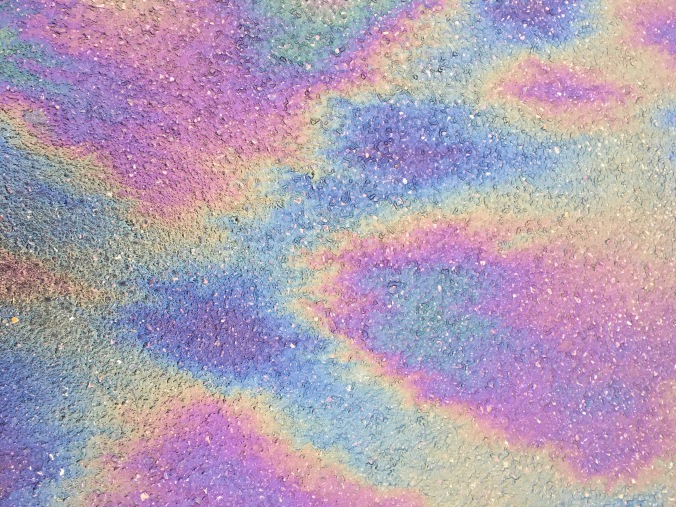 Photos of oil on water by Christopher Cudworth 2017

On Christmas Eve the Christian world fills with anticipation as one of its high holy days is about to arrive. Millions will attend church to celebrate Christmas Day, the traditional time affixed to the birth of Yeshua, or Jesus.

Yet we now recognize the Christmas season as we know it is a fabrication. The most ardent biblical literalists are the ones that have exposed the ruse, and confessed. The website Answers In Genesis fashions itself a key defender of all things “inerrant and true” about the Bible, and even it has grave doubts about the time of year in which we celebrate Christmas.

After careful scriptural exegesis of the Jewish calendar and its documentation of the time of year in which John the Baptist was born, Answers In Genesis says:

“This would have put John the Baptist at about six months in the womb around August/September. Assuming about nine months for pregnancy, John would have been born about November/December by the modern calendar based on the assumptions we used.

If the Holy Spirit did come upon Mary in the sixth month (Elul) or around August/September, as it seems to indicate in Scripture, then Jesus should have been born about nine months later, which would place His birth around May/June. Since John the Baptist was still in the womb of Elizabeth when he leapt for joy in Jesus’ presence (Luke 1:39-42), this means that the conception had to take place within the next three months or so of the visit by Gabriel—before John was born. Regardless, by this reckoning, the birth of Christ isn’t even close to Christmas on the modern calendar.”

Answers In Genesis is not alone in this correction of supposed history, but this example makes the point that harsher cynics have long claimed: Christmas is an invention of religion designed to serve a specific purpose. The narrative of Jesus born in Bethlehem was cobbled together by a series of Gospel writers who either copied one another or chose a different emphasis depending on how they viewed the Christ story.

The Nativity with the animals gathered around and Wise Men attending is also manufactured for the purpose of giving the Christmas story a focus. People need that. It helps them pass along the Christmas tale to new generations. The story of the baby Jesus lying in a manger is appealing to parents sharing the tale with younger generations.

And so it goes. In the modern era, it has become a bit more difficult for Christians to defend the verity and meaning of this story because the season has become perverted by the massive commercial significance of the holiday season. This has not been the fault of the secular world. Many people celebrate Christmas because it’s fun, but that permission has long been granted by the competing tale of Santa Claus bringing gifts to small children and adults alike around the world. Christians have willingly conveyed this myth for over a century now. There is likely no turning back.

The history and popularity of the myth of Santa Claus is irrelevant to the true meaning of Christmas. But it does have a parallel significance in where we are in Christmas traditions today. Some Christians claim that Christmas as a religious holiday is under siege by secular forces who want to ban the words “Merry Christmas” from the cultural lexicon. The so-called “War On Christmas” is preached from the pulpits of Fox News and pasted like butter on the bread of social media for so-called devout Christians to spread the word that Christianity is under attack.

This serves as an important lesson on the real meaning of Christmas. If Christianity truly is under attack, then it is justified in every sense of the word. The holiday as we know it has been whored out to commercial interests just as the Jewish temple was once prostituted by the religious authorities in Jesus’ day. He attacked those authorities first through his words, warning them of their hypocrisy for making rules from scripture and basically charging people admission to the temple of God. Jesus castigated those same authorities as a “brood of vipers” for clinging to this power and lording themselves over others.

Jesus was born into this world to challenge that type of false authority. That baby in the manger was born out of need, not from kingly circumstance. His principle message was preached first by John the Baptist who exemplified the simplicity and virtue of true devotion to God in his call to repentance.

Jesus embraced and carried this message all the way up the chain of culture to the ultimate seats of power. He offended the chief priests and denigrated the scribes for the slavery of soul they imposed upon the rest of society. And when those offended gathered themselves in righteous fury they captured Jesus and delivered him to the Romans with the intent to dispose of the itinerant preacher they considered a blasphemer.

Do you see it now? Jesus was born to expose such charlatans. That is the real meaning of Christmas. And if we were to apply that meaning to the world today, who would those charlatans be? They would be religious authorities sacrificing true devotion to God for access and control of political power. They would be leaders who were unwilling to confess their own lack of virtue, yet who claim to know the true heart of God out of their own bold ego. They would be all those who embrace such leaders and buy into their serpentine logic that trying to act like God equates to being like God.

The characters we know as Adam and Eve fell for that trick once long ago. Christians call it Original Sin, and it resonates through the world to this very day.

So when you find a moment to consider the real meaning of Christmas, consider not how or where Jesus was born, but why. And apply that lesson to all that you do. The world will expose itself one egregious scam at a time.

And you will be blessed for knowing it.