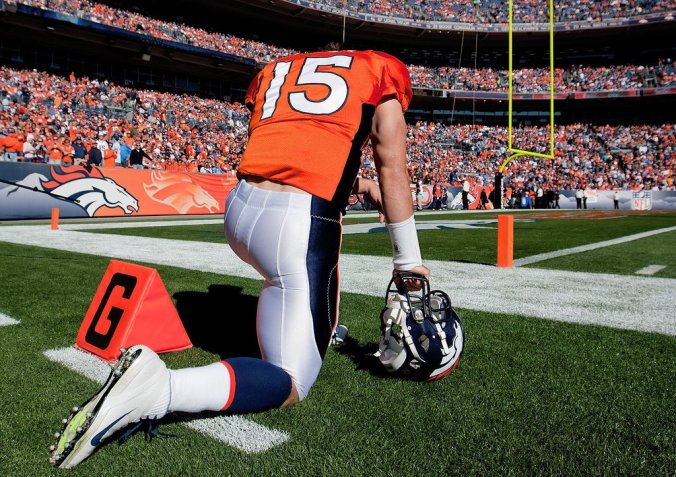 A few years back in NFL history (around 2011) quarterback Tim Tebow got controversial for kneeling in prayer during gametime. Some supported his right to express his faith. Others found it distracting and annoying.

And the NFL, as it always does with controversies, just wished it would all go away. Despite seemingly solid status as a former Heisman Trophy winner and top-flight college athlete, Tebow eventually did go away. The typical career of an NFL player rarely exceeds three years anyway. The game is perpetual. The players, disposable. 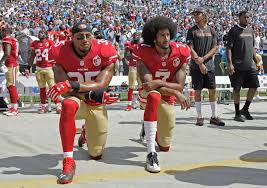 Then came Colin Kaepernick who kneeled during the National Anthem in protest over civil rights abuses in America. The NFL”s fans again exploded in words of support and vitriol toward a quarterback. As kneeling in protest expanded throughout the NFL, even President Donald Trump got involved Tweeting nasty comments toward all those who participated.

So it appears that kneeling in either prayer or protest is controversial to some. But is there a direct divide among people who support one but not another?

That would be an interesting subject to study. If a majority of those who supported Tim Tebow’s public demonstration of Christian faith also disapproved of Colin Kaepernick’s secular complaint over treatment of black Americans, what would that say about the real values of those involved?

And if a majority of those who stand with Kaepernick earlier hated on Tebow for showing his belief in God, what does that say about the state of culture today? 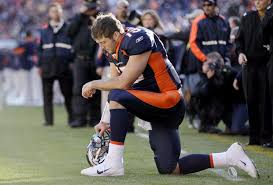 In both cases, we are witnessing attempts to bring some sort of humanity and perspective to the game of professional football. Some have argued that employees of pro football sign away the right to personal expression in favor of team and corporate loyalty. Still others project the onus of national loyalty on the situation, claiming that players such as Kaepernick and others are disrespecting the flag and even the military who fought to defend it.

But what if Tebow had come out in favor of Christian pacifism, even to the point of protesting the wars that America so proudly claims as symbols of liberation and freedom?

It would seem that players now kneeling in protest are indeed standing up for a critical aspect of American freedoms. One might even argue that fighting for civil rights by definition includes freedom of religion as well as freedom from religion.

So the anger over Tebow and Kaepernick is equally confused at its source. This stems from the seemingly poor understanding of what constitutes both religious freedom and equal rights under the Constitution. Plenty of people who claim that America is a Christian nation seem to neglect the fact that the Constitution itself states that there shall be no establishment of a state religion.

It also states that the rights of citizenship apply to all Americans, not just those who abide by the Christian faith.

Which makes the cause of Colin Kaepernick somewhat more inclusive than the cause of Tim Tebow. Because when Tebow kneeled to pray, he might have represented the portion of the population who shared some aspect of his beliefs. But when Kaepernick and Company kneel in protest for civil rights in America, they truly stand for all according to law. And the Republic run by the United States government is a system of laws.

Whether they are applied equally and fairly is the question raised by Kaepernick and other NFL players using pro football as a mouthpiece for civil rights. One could argue that those kneeling are participating in a sort of secular brand of prayer. 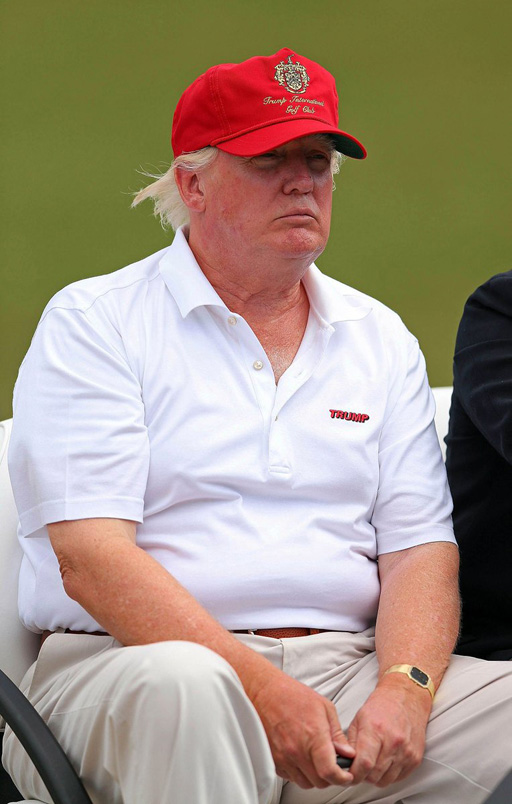 Revealing such vulnerability and concern does not set well with the ethic of machismo associated with pro football or for that matter, with a certain sort of bully pulpit ideology that has emerged since the election of Donald Trump.

The “game” that thrives on domination and violence has little patience for softies. Its fans appreciate short attention span theater. It is gladiatorial players that earn the most kudos for theatric hits and displays of triumph. Shut up and hit someone.

That’s why kneeling players really stick in the craw of those who like their football pure and stupid. The game itself has shown little sympathy even for players whose minds and bodies have been destroyed by its force and madness.

Thus pro football is in the crux of its own contradictory nature. It struggles to reconcile its punishing brand of sport with its desire for sustainability in the face of cultural pressures that may not agree with its longstanding policies.

Thus America’s Game is a microcosm of America itself. The United States of America has a conflicted personality over these same issues. It’s history is often brutal and unforgiving. It was a continent-wide genocide that led to dominance of European settlers driven by a worldview known as Manifest Destiny. The same worldview drove a belief in the right to own slaves, and for a century after the Civil War, that raw brand of prejudice still dominated American culture.

Only in the last 40 years did real equality seem within the grasp of black Americans. The election of Barack Obama as President seemed to seal an element of that progress.

But an angry distortion of what constitutes civil rights is still alive in this country. The eruption of the Alt-Right into mainstream consciousness has alerted us that the Civil War was fought, but never finished. Those same instincts live on in people who might support the right to pray, but not the right to kneel in front of NFL crowds.

And that’s why the NFL struggles with the beliefs of its players, but also with its fans.