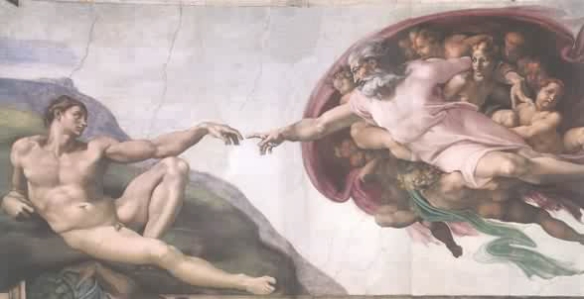 Word just came down from heaven that the Statute of Limitations on Forgiveness of Sins has just expired. It’s a sad thing, but it probably had to happen. Apparently, God has decided––and we all know God changes his mind now and then–– that the world needs yet another lesson about the meaning and value of life.

He’s tried several times before to cure the human race of its greed and ugliness. Let us recall the rhetorically powerful Noachian Flood, which wiped out every living thing on earth that wasn’t bundled up in a dirty old cruise ship.

When that didn’t work, God threw his own Son Jesus into the Roman Meat Grinder as a means of atonement for human sin. But people still did not get the message.

Even that act of sacrificial atonement, if you want to look at it that way, could not permanently compensate for the level of greed and corruption being foisted on the world by a growing cabal of literalistic latter-day religious types and conservative political companions who have turned the name of Christianity into a brand symbol for gross consumption and hateful zealotry.

So God has decided the time to act has come again. This time round the Good Lord has determined that a Reality Show will be the best way to get the people’s attention. And thus, we will be treated to an elegantly crafted six-week mini-series titled “Jesus Dies Again,” a series of contestants will be invited to conduct a trial for Jesus Christ.

God is quite interested to see if the outcome will turn out any better for his Son than it did 2000 years ago when the habitually vicious Roman Procurator Pontius Pilate washed his hands and sealed the fate of that Jewish itinerant preacher named Yeshua. You know how the story goes.

And we should not forget that the religious leaders of the day had plenty to do with the trial and execution of Yeshua. Their flaw was not that they were Jews, or that they sent Yeshua to be tried and killed by Romans. Their flaw was that their legalistic interpretation of scripture prevented them from comprehending the real message of Jesus, which was a call to grace and a plea for mercy and forgiveness on behalf of all people of the world.

Instead, those power-obsessed religious leaders of Yeshua’s day saw his emergence as a threat to the authority, their religious economics and a way of life they thought they’d earned by running the Jewish faith like a Whole Foods Market: A lot of expense for stuff you should be able to get a lot cheaper.

So God will work with producer Marv Bernstein (by no coincidence also a Jew) to create the new Reality Show  titled “Jesus Dies Again.” (Premiering Easter Sunday on TBS).

The show will put modern religious leaders and political types being put to the test of trying to acquit Jesus before a jury of his peers. And if somehow the guest judges do not find a way to defend the legacy and preaching of Jesus Christ… by actually proving that his message of caring for the poor, loving your neighbor and forgiving your enemies is enough to justify his life…Jesus will be crucified all over again. And Again. And Again. Until someone gets it right. The show will last seven days, and if no one Saves the Savior, the world will be finished. The human race will be wiped out.

“We’ve always looked at the Resurrection as the ultimate form of recycling,” says onetime Hollywood filmmaker turned Reality Show producer Marvin Bernstein. “We Jews have a sense of humor about these things.”

And of course, the show “Jesus Dies Again” will also feature cameo celebrity readings, songs and rap interpretations of passages from the Book of Revelation. Viewers, in turn, will be invited to Tweet their 140-letter prophecies out to the world as a commentary on what they’ve just heard.

“We were going to work with Facebook,” Bernstein admits. “But we all know that thing is a god-awful mess. All those phony memes and such. It’s like hell on earth if you think about it. People calling you Friends when they actually hate your guts for everything you post.”

“So we’re going with Twitter. That’s how the world works now,” Bernstein chuckles. “If God wrote the 10 Commandments today, it would take him 10 Tweets to get them all onto one stone.”

Celebrity cameo readings from the Book of Revelation will also be featured. Reported stars who will be involved in a hip-hop and song segment called REVOHLATION will include Miley Cyrus, Lady Gaga and .25 Cent, the star whose public value got cut in half when his stock options took a hit in the recent recession. “I’s a goddamned shame,” his publicist K’Noh Tweeted. “Niggah can’t get a break in this worhl.”

And speaking of breaks. The show Jesus Dies Again will feature a re-enactment of the Battle of Armageddon, which of course has yet to happen, and probably never will. But that won’t stop more than 20,000 extras from gathering on the Bonneville Salt Flats to act out the battle between Good and Evil. The scene will be filmed by a team of more than 50 remote-operated drones while scenes are live-edited by a team of graphics editors working for $30.00 an hour in Belarus. “It truly will be a global operation,” producer Bernstein enthused. “Almost like the real Armageddon.”

Easter’s coming up quickly, and God decided the time was right to force people to take stock of their lives. The trial lawyers and judges in the series Jesus Dies Again will feature the likes of Donald Trump, Ted Cruz and that famous Christian proselytizer Mike Huckabee. “Trump is like Pontius Pilate and King Herod combined,” Marv Bernstein enthuses. “But let’s see how he does keeping those fake types from crucifying Jesus because he’s a goddamned liberal.”

As for the current state of the world, there are apparently clear reasons why God is so pissed at the state of humankind. Recently a publicist from Heaven, Inc., the production company producing the series Jesus Dies Again, has sent a faxed document to news operations around the world. It appeared to indict the activities of the American oligarchy, The Bush Family and its associations with the military-industrial complex. The faxed press release read:

“Considering Marvin Bush’s security firm was in charge of LaGuardia, United Airlines and the WTC on the day of the 9/11 attacks, God thinks the idea that the 9/11 tragedy was an inside job is hardly a stretch. And it was all done on the day when a national drill simulating a commercial airline highjacking mandated that all fighter aircraft stay grounded. And then every shred of evidence — the beams, concrete — all of the debris field from the fallen towers was immediately loaded on barges and shipped to China for recycling before investigators got to look for traces of explosives, radiation, etc.”
The press release from God went on to say. “The Bush Family Crime Syndicate is the most far-reaching and nefarious organization in the world. It has infiltrated every level of finance (Herbert Walker was a banker who funded Hitler, don’t forget), military-industrial complex (Carlisle Group), energy industry (Halliburton), and intelligence (CIA, NSA — remember George Sr was Director CIA before becoming Vice President, and it was his team led by Ollie North that ran Iran-Contra, securing the White House for Reagan over Carter, and a photo shows GHWB present on the day John F. Kennedy was shot). Not to mention the international illicit drug trade. The Whore of Babylon sells drugs.”
In other words, God is pissed that this stuff has all been allowed to transpire in the world. He’s ticked off that the mixed ideology of the Republican Party with all its selfish indignation has been allowed to corrupt the very foundations of Christianity and has now wrought an Orange Creature far worse than the Anti-Christ. That would be none other than Donald Trump, whose golden hair belies his evil nature.
But like the merciful God he has always been, God is going to give people a goddamned second chance to prove they’re capable of getting the message of Jesus Christ after all.
But if they don’t,  Jesus Dies Again. And Again. And Again. And Again. And Again.And Again. And Again. And if the Reality series concludes without producing one innocent verdict, that’s it. The world’s fucked. And there will be nothing anyone can do about.
So tune in. It’s going to be a Great Show, and a wild ride.