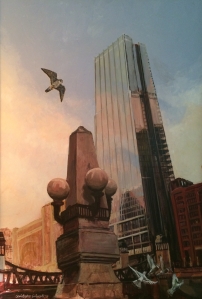 Painting by Christopher Cudworth of Chicago skyline with peregrine falcon.

As a very young artist I was fortunate to receive a series of commissions from a man who would go on to earn great wealth. At the time I met him, he was in the early throes of a vision that led to one of the top investment trust companies in America. A decade or more later he sold his firm to a larger entity for a profit of $400 million dollars.

For a short period of a couple years I worked for that company. That was a strange experience in some ways. The man who founded the company was also a zealous Christian fundamentalist. He formed several churches during his life. At times it was rumored that he wrote the sermons himself, critiquing the pastors he hired to deliver them.

With his growing wealth he accumulated a collection of some of the rarest bibles in the world. Then he built a bunker residence in western Michigan. If it weren’t for the fact that the man was quite sociable and publicly driven to convince the world that his visions were true, it might all seem rather like a Howard Hughes story.

Sadly, the man literally died of disease that hardened the flesh and organs of his body. His trust outlived him and is overseen by a team of trusted managers to provide for his wife and family.

So this is not to criticize the man personally. As stated, our relationship was an interesting one. At a time when I was no longer working for the company, he called me up for additional art commissions. He was thinking big as usual. “I want two 4′ X 4′ paintings of falcons for either end of my board room,” he told me. “I can hire you for $1500 or I can hire Robert Bateman (a famous wildlife painter) for $50,000. Do you want the job?”I took it, and hauled those paintings in for approval several times. He finally purchased them.

So I knew him well enough to at times discuss aspects of life and faith and success. During one of our transactions I asked for a little more money because I’d worked particularly hard on a painting of a bald eagle. I was 17 years old, and requested $120 for a painting upon which we had agreed on a price of $100. He pulled out his Bible and gave a short sermon backed by scripture. The point he was trying to make is that a ‘bargain is a bargain.’ Yet he still payed me the extra $20.

He was certainly a man of convictions. As his wealth grew so did his ability to focus on theological issues. He developed his own theory about the coming Rapture. It was based on a series of convoluted scriptural references that was essentially debunked by fellow Rapture conspiracists who debate such things with avid furor.

So interesting that it’s all based on the original conjecture of a host of believers convinced that the Bible holds patent clues as the End of Time. One particular 1800s American preacher named John Darby particularly popularized the myth of The Rapture. From there it spread into a myriad of strangely fantastical versions of Armageddon based on bible takings from the books of Daniel and the Book of Revelation.

But the Rapture was not all that fascinated my wealthy friend. He funded a search for Noah’s Ark and provided money to the leading creationists of the early 80s.

All this literalism and reverse literalism made for a complex vision of a man who was obviously smart enough to become one of the wealthier men in America. Yet when I stood in our office one day talking toe to toe with one of the leading creationists of the day, he could provide no answers to the simplest questions of biology or geology. All it took to confound the man about the age of the earth was a simple illustration of the theory of plate tectonics. He was instantly at a loss to reconcile such hard evidence of times past.

That’s because creationism is essentially a science of denial, not one of discovery. It depends on anachronism for its verity. It has no forward progress in its makeup. No new knowledge can come from it. It is nothing more than a lockbox for a literalistic worldview of the origins of the human race and the universe.

At the same time it is something of a Pandora’s Box, because creationism, upon its release in the world, knows no limits in its mad schemes to rule the worldview of all those who encounter it. Creationists work hard to promote their very limited perspectives on history. They depend on props like a literal world flood to explain geology, and Noah’s Ark and the character of Adam to describe all the types of animals in the world.

Yet they cannot explain the complex fact that blind salamanders in Tennessee caves somehow migrated out of their native environment all the way across an ocean to reside in an ark for forty days and forty nights. Then they swam and crawled across deserts (with no working eyes!) to get back to their dark, watery caves below the earth. There are millions of creatures just like this, that had no way to navigate or manage a trip across thousands of miles of ocean just to get to an ark.

Yet that is what the man with all the wealth in the world wanted to have everyone else believe. He put a ton of dough behind the idea, and might certainly have helped fund projects like the insane Creation Museum in Kentucky if he felt that it might convince a few more people that the Bible was literally, infallibly correct.

We’re stuck with these inane beliefs because people with low levels of insight on scripture and science refuse to give in lest they find their entire worldview is a house of cards. And so it is that between 30% and 50% of Americans who hold these views are still trying to jam prayer into public schools, and force textbooks to present a Christian form of creationism as possible fact.

The great wealth of Christian knowledge lies not in the sick obsession with proving an anachronistic view that even Jesus would have laughed at. After all, Jesus taught using highly organic, highly symbolic parables to present spiritual concepts. He lampooned the Pharisees and others who sought to turn scripture into rigid laws and a worldview that punished people for believing otherwise.

And Jesus insisted to the wealthiest men of his time that the best thing they could do to enter the kingdom of heaven was to relinquish their wealth and seek sources of greater insight. Because when you have enough money to buy what you want to believe, you tend to ignore and resist everything else. And that’s the problem in America right now on many sides of the aisle. 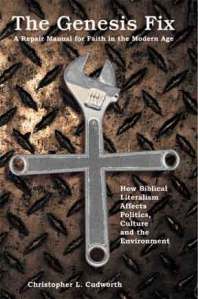 The Genesis Fix: A Repair Manual for Faith in the Modern Age