National approval for Open Carry is next on the agenda of the American gun lobby. Wait and see.

I saw another sign banning Concealed Carry the other day. It was posted on some street barriers in anticipation of Cruise Night at a nearby town. You know the sign: A picture of a handgun with a red circle and a slash through it.

Right now it is legal for some organizations to post one of those signs. If you run a church or conduct a community event where weapons might not be welcome, you can request or demand the right to ban weapons on the site.

This must rankle all those people who think Concealed Carry is the answer to all our social problems. After all, the laws passed in all 50 states are supposed to guarantee the legal right to pack heat, right? What’s the real point of banning guns anywhere? If you can’t take your handgun into church and someone decides to shoot the place up, how are you going to defend yourself?

That’s the premise of Concealed Carry. The idea that other people might be legally carrying weapons is supposed to be a deterrent to criminals who might otherwise choose to pull guns and open fire.

Only deterrence is just an imagined protection. There’s no real proof that the idea of other people carrying guns is any real deterrent to people angry enough or bored enough or frustrated enough to pull out guns and start shooting at people in public places.

The supposed logic of so-called Concealed Carry doesn’t bear out at any level. Let’s face it: the only real deterrent to anyone about to shoot up society is another person with a weapon openly displayed and aimed at their head. 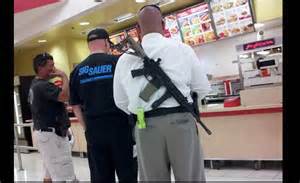 So thinking it all through, it’s actually Open Carry the gun lobby is really after. Concealed Carry was just a stepping stone Open Carry becoming the norm in society. We’ve already seen gun-obsessed people strolling through towns and cities with rifles over their shoulders, daring anyone to protest their presence.

Open Carry is what they really want. It’s time to force the gun lobby to admit it. Concealed Carry is no real deterrent to illegal use of weapons. Only Open Carry can do that. Otherwise the shooter figures they can outdraw anyone in a gunfight. That’s what the Hollywood movies and all those hardass gun instructors like to teach. Shoot first and best and you survive.

It’s all based on fantasies and delusions. Everyone figures they’re a faster gun and better aim than everyone else. It’s like the opposite of winning the lottery. With Concealed Carry, the odds of being shot are growing bigger every day. It’s a fascinating phenomenon, and the fact that more civilian Americans have died from gun violence than all the American soldiers that have died in foreign wars is no deterrent to the gun lobby. They just want more, more, more.

Along with Concealed Carry, the worst news for people who appreciate freedom from violence has been the invention of the Stand Your Ground laws. Such laws were supposedly created to give people protection with the right to “defend” themselves in situations where they feel threatened. But guess what? Stand Your Ground laws are proving to be a bad, bad idea. Studies by the American Bar Association have shown that Stand Your Ground laws actually result in an increase in homicides rather than a decrease in gun violence. The American Bar Association report recommends the laws be revised or in some case repealed as a result.

An article about the report in the Lansing (MI) News states the following: “The task force also suggests that the laws (SYG) only apply if the aggressor shows a weapon before deadly force is used, and recommends that judges give juries more detailed instructions on when a “stand your ground” claim can be used.”

Now a normal person would read that paragraph and say “Good, they’re going to roll back the Stand Your Ground laws because it promotes gunfights.”

But a gun advocate will likely look at that statement and determine that the better solution is to remove all need to conceal weapons. Let Open Carry be the rule of the day and criminals will really be deterred from attacking.

Except continuing escalation in the militarization of society is turning the process of enforcing the law from a police action to a military strike against those trying to outgun them.

The comments on the Lansing News website led off with this insightful screed (sic):