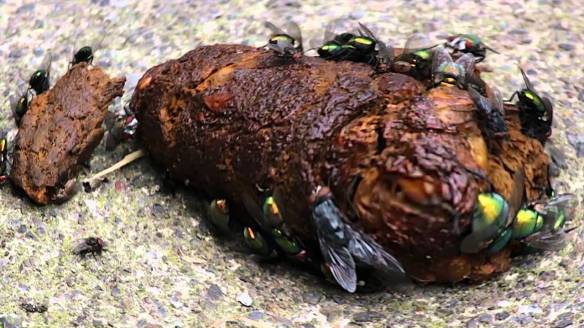 Wait, could it be? For a second there it looked like a face on the rump of that shit.

Almost two years ago when the 2016 election campaign had just begun, I’d written quite a bit already about the achingly awful qualifications of prospective Republican presidential candidates. Every one of them was a shitty choice. None of them had leadership qualities or anything resembling a broad enough worldview to serve as an effective president. And I said so.

Long before that patent situation served up such a stink, I’d spent quite a bit of time on social media savaging and ridiculing neoconservative thinking on subject matter ranging from health care to religion to social issues and culture. This consistent engagement on such subjects proved frustrating to some of my conservative friends. A few unfriended me on social media such as Facebook. Frankly, I was glad to be rid of them. Their cognitive dissonance in defense of Republican failures on the economy, speculative wars and backward cultural and social policies reeked like a pile of confusing shit.

At one point, it was passed along to me that a casual acquaintance and cycling friend who had followed me for a while on Facebook was Unfriending me. A friend passed the reason along. “He says you make him feel shitty.”

Well, when conservatives (and so-called neoconservatives) set out to make the lives of so many people a living hell by blocking equal rights for gays, ridiculing civil rights efforts for minorities and publicly torturing women (can you say Rush Limbaugh and Sandra Fluke?) over health care and reproductive rights, someone has to speak out.

The shitty behavior doesn’t stop there, however. Neoconservatives went on the attack toward President Obama before he was installed in office. But Obama had done nothing to earn their ire on the order of what Donald Trump has just done to insult Americans. So conservatives went “desperate” by insisting he was a Muslim to make him look like he was a sympathizer with Islamic terrorists. Still others attacked him on grounds of the legality of his birth certificate. That was just a shitty attempt to disqualify the man for political reasons, yet there were underlying racial insults behind those attacks as well.

When Obama exhibited genuine leadership or would not give in to such torments, dog-whistle campaigns emerged insinuated he was “uppity,” a racially driven conflagration designed to threaten and control our President. The attacks on the looks of his wife were similarly ugly. And they never relented.

It is next to impossible to counter such ignorance and prejudice. People who think and act that way, all the way up to national leaders such as Sen. Mitch McConnell, are just shitheads by nature. His angry promise to block all attempts at governing in order to make President Obama a one-term president was a display of shitty character.

Yet some people seem to admire shitty characters. It’s in their blood to choose ugly and angry behavior over a considerate or God Forbid, academic approach to problem-solving and policy. That’s why men like Vice President Dick Cheney and Donald Rumsfeld proved so popular among neoconservatives eager to whip the world into shape using military force or even torture to get their way. The motto is Be Shitty to Others Before They Can Be Shitty to You.

Religious conservatives aren’t much better. Throughout history conservative cabals have consistently defied the “turn the other cheek” admonitions of Jesus Christ to side with zealots and nationalists eager to win the world for Christ through war.

This is a really shitty thing to do to the fundamental precepts of Christianity, which calls us to “love our enemies.”

But let’s admit it: Jesus had his hands full even in his own day with religious legalists and warlike zealots, one of whom turned out to be the disciple that betrayed him to the authorities. These are the types of shitty believers who think they know better than God how to run the world.

Zealots for Christ are still running amok in the world, starting new Crusades toward other religions and acting as if they have absolutely no confidence in their own God, lest they should leave it all to faith and trust as the Bible says. Instead, they grab hold of the Bible and make it a bludgeon for creationism or Manifest Destiny or hating gays for simply existing on this earth.

It’s all the work of narrow-minded zealots who don’t like to be held accountable for the cause and effect of their shitty ideology, which actually blows over like a house of cards when held up to the merest intellectual or moral scrutiny. But zealots never let that happen, because their approach to theology is to attack first, and apologize never.

As a result of all this defensive posturing, conservatives, as a rule, know quite well how to defend their shit better than anyone else. And they use creative methods.

A favorite practice of conservatives (social, political, religious, fiscal) is to accuse the other side of the very faults they find so offensive in themselves. This is the Repression Factor in all conservatism. Rather than come to grips with reality, it is far easier to deny instincts of fear or failure or sexual desire than to act in good conscience and seek out the reasons why those repressive instincts exist.

But sometimes its just mean-spiritedness that drives repression. That’s how conservatives “Swiftboated” the honorable military career of John Kerry. It is also why neoconservatives and the Alt-Right accused Obama of being Muslim to paint him as a sympathizer with Islamic terrorists. That’s a really shitty thing to do, and lacks any significant conscience.

Which is why I don’t feel any real need to apologize to my conservative friends for making them feel shitty the last few years. Because the outcome of this Republican shitstorm is the election of Donald Trump to President of the United States. Even devout conservatives know this is a really shitty outcome for the party. Yet they’re holding their noses and chortling “victory” because they think they’ve won.

But that reminds one of the old joke about the guy that lost his sunglasses down an open latrine. He goes in to grab them and his buddy asks how much shit he can expect to encounter if he jumps in to help.

“Well, I dove in,” his friend replies.

And that’s a perfect allegory for where we find ourselves headed into 2017. We’re all neck deep in a really situation because 26% of America saw fit to vote for an orange-faced maniac who treats everyone he meets like shit.

That’s why I’ve been so willing to make my conservative friends feel shitty for so long. Because I saw this coming. I knew where the ugly Bush years were leading us, and what it meant that people saw fit to treat President Obama like shit just because he was black, or they thought he was Muslim, or believed he would take away their guns.

That was the shit sandwich neoconservatives and the Alt-Right served America the last eight years. Now we’re all told we have to eat it. Some of refuse. And that’s why I’ll keep on making conservatives, friends and otherwise, feel really shitty about what transpired in 2016.

We don’t have to take this shit. And we won’t.