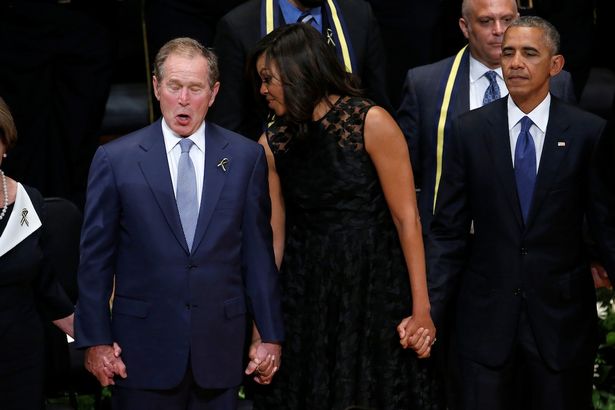 The video from the memorial service for five slain Dallas police officers was disturbing. There was George W. Bush dancing and laughing as if he were attending a child’s birthday party. It was, to say the least, highly inappropriate behavior from a former President of the United States of America. Frankly, it was quite insane behavior for anyone.

Michelle Obama tried her best to bring dignity and respect to the situation. But Bush was having none of it. Looking drunk or crazed, or a little of both, he kept swinging hands and singing out loud like a preschooler high on cookies and Kool-Aid in the year-end pageant.

It was a shocking display. But let’s not forget that this isn’t the first time President Bush has embarrassed the nation. At another very public event, he proudly yucked it up over his failure to find weapons of mass destruction in Iraq. The irony was bitter considering that America invaded that nation based on specious contentions that Saddam Hussein had WMDs that he planned to use against America.

Never mind the fact that international inspectors had done their jobs and found no traces of WMDs anywhere in Iraq. To counter that evidence, Bush and his snide administration trumped up their own “evidence” as reasons to invade. That pack of lies led to thousands of American soldiers dead or wounded in Iraq. Yet Bush thought it sensible to make jokes about his enormous folly that cost thousands of American lives and trillions in American treasure seeking to prove the point that America was the most powerful nation in the world.

In horrific fashion, Bush even tried to cover up evidence of American lives lost in that cowboy venture. The Bush administration banned photographers from taking photos of the war dead arriving back on American soil. Hiding the truth is the most cynical act a politician can do. Yet Bush had no qualms in doing so, even when it effectively dishonored the sacrifice of those willing to give their lives for their country.

The company of fools

It made America look like fools to go along with the insane plans of the President. Yet the facts are clear: George W. Bush and his Republican friends thought they could easily fool the nation into believing their doctrine of imperialism was the best course of action for America. And at first, many believers were fooled by the fear and terror Bush threw in their faces. Ultimately, however, became clear that it was lies and complicity that led America into that war. Those of us who protested the Iraq War at the time were branded unpatriotic. That’s a fact that still angers true (and actual) patriots to this day. We knew that whole Iraq strategy was a partisan farce.

Laughing in our faces

When a domestic crisis hit during Hurricane Katrina, Bush again demonstrated a near total lack of grasp of the situation. People were drowning in New Orleans. Then the population lacked food and supplies to make it through the initial stages of when hunger and thirst were a threat. Loss of homes and places to live were desperately needed. Indeed, the delays and shortcomings of the self-oriented Republican administration were a massive failure, and the American people knew it this time. Yet Bush saw fit to compliment his inept and incompetent FEMA leader by saying, “You’re doing a heckuva job.”

No respect, self or otherwise

So it should not be any surprise, perhaps, that George W. Bush did not know the somber meaning of an occasion when respect for the slain officers should have been paramount. He was dancing around as if he were attending a religious revival. Perhaps that provides the ultimate explanation. For Bush projected his strange brand of faith onto all sorts of situations over his tenure and beyond. But all it has proven is that he’s a goddamned fool.

And what that means to America is that it can happen again. The same people who dismiss the likes of the idiocy of a jokester like Bush are rallying behind an even greater jerk named Donald Trump. There is no excuse for that support other than the fact that people do not understand that he’s dancing on the grave of what America once was, a nation with a conscience.

It keeps happening because people who think and act like George W. Bush keep getting elected to prominent positions by people who can’t tell the difference between dancing at a funeral and dancing a strip club. It’s the pornography of American politics. And welcome to it.