Now that the effects of Brexit are becoming real in terms of uncertainties in world financial markets, international trade and basics like where people are allowed to live, people have begun to realize what an honest-to-goodness fuck-up it actually turns out to be.

Stalwarts will long insist that Brexit is the step toward political freedom Great Britain needs to take. The Scots and many other sections of Great Britain, which itself is a union of nations, will forever disagree considering that country voted 62% to 38% to Remain in the European Union.

Those voting for Brexit surely did not understand all the political and economic ramifications of the decision. These were the fuck-ups who drove the big fuck-up. Such is the nature of angry populism, which can lead even to fascism in the wrong political hands. Here in the United States, we’re flirting with a massive fuck-up of our own in Donald Trump, the designated nominee for President of the United States for the Republican Party.

This is a man who flaunts his failed marriages and failed businesses and dares people to challenge the perception that he’s not a massively famous fuck-up. In that respect, Donald Trump issues the world a massive Fuck You every time he shows his orange face in public. His hair is a fuck up. His speech pattern with all its perverse Yoda-like and backward braggadocio is definitely the hallmark of a habitual fuck up. He starts with his false contentions and qualifies them as he goes along.

And a Huge Fuck You

His fans (whom we must hesitate to call voters for the moment) all seem to love his Fuck You message. Former Republican politicians such as Joe Walsh, now a conservative radio host on AM 560 in Chicago, have publicly stated they would rather “blow this thing up” than let a Democrat such as Hillary Clinton win the election. Walsh and his ilk were critical of Barack Obama before the man even took office. The Republican-led Congress have behaved like a pack of massive fuck-ups for all eight years of Obama’s administration and have done nothing of any consequence except shut down the government and pass about 50 appeals to repeal the Affordable Care Act. Other than that, they’ve spent all eight years of their authoritarian rule telling the American people and Barack Obama to go Fuck Off.

Trump steps into this Fuck Your role perfectly because his “Take Back America” campaign theme cloaks the extremism of his supporters behind a bit of patriotic language. Never mind the fact that the America for which his supporters yearn is one with racist roots and based on an economic model that was gutted by the very Republican Party to which so many conservatives and angry independents claim to subscribe. All those manufacturing jobs shipped overseas and down south to Mexico by free market capitalists with globalism fever are never coming back. America has created some 11 million new jobs since Obama helped turn the economy back around, but less than 1% of those jobs have gone to people without college education.

That means all those honest, hard-working Blue Collar Trump Supporters have been fucked over by the very people they claim to support. The union system in America has been trumped by a euphemistic Right To Work campaign that says Unions Are Bad, Jobs Creators Are Good. At least the national elections in which Obama won and then retained the office of President prove America still has some common sense. But the Fuck Ups still know how to win local elections where rube anger is so easily leveraged into repeat terms for Congressman and Senators selling Pro-Life as the ticket to national office.

Here in America, we may yet see a Texit if the State of Texas gathers enough Fuck You votes to secede from the Union. At least America might be freed from the fascist control of public school textbook content if that were to happen.

But again, a Texit would be a fuck-up on the order of the original Civil War, in which a small slice of controlling slaveowners convinced thousands of Confederate loyalists to go fight and die so that white people could continue to own and torture black people for profit and entertainment.

The people who support Donald Trump are following the same sort of instincts. Just as slaveowners were calculating fuck-ups with enough sophistication to rig the system to their own favor, and damn the consequences of human rights and equality, so has Trump played American Fuck-Ups for all they’re worth in running away with the Republican ticket. 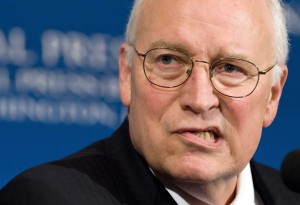 Remember that Trump comes on the heels of the biggest Fuck Up and Fuck You administration in American history. George W. Bush was a primo fuck up. He let 9/11 happen on his watch and then let psychopaths like Dick Cheney, Donald Rumsfeld and the like loose on the world. The Bush administration sold fear like it was bitter candy, convincing gullible Americans through lies and manipulation that there was a connection between Osama bin Laden and Saddam Hussein. And what was the Bush advice when America was shocked by the 9/11 attack? “Go out and shop.” That’s what he said.

It was all an ugly breach of public trust followed by one horrific fuck-up after the other. The Hurricane Katrina debacle and the Bush indifference to people’s suffering perfectly symbolized what would later happen to the American economy under his watch. Fuck Ups like that always lead to Fuck Yous from their authoritarian authors.

The petulant ignorance shown by American “conservatives” in support of Bush and his torturous presidency amounted to a fuck-up of massive proportions. Yet even with the catholic brand of support for Bush and his evil bishops, there has never been much will to confess to the crimes and abuses perpetrated on the American people. Instead, we’re all told by conservatives to Look Forward rather than look back at the recent fuck ups of the past. Bush and Cheney were the dual kings of Fuck You, claiming rights to the Unitary Executive, with Bush proudly stating that his job would be “easier if I were a dictator.” They should have been tried for war crimes but Obama in a show of good will refused to pursue those actions. It would have been good for America in the long run to demonstrate how evil and corrupt those criminals really were (are) but to Obama’s credit he truly did Look Forward and has done a stellar job of leading the country despite resistance from the pack of racist fuck-ups who insist their ways are better.

And that brand of tripe is now in full evidence in support for Donald Trump.

Don’t you get it? Can’t you see the message Brexit is sending America? Don’t you understand that if you support Donald Trump, whether he is genuinely a serious candidate or simply a man thriving on a massive media campaign whose theme is Fuck You, this is not a good direction for America to travel?

If you can’t see that, then you really are a fuck up. And in that case we all have one thing to say: And that is Fuck You for being so goddamned stupid.