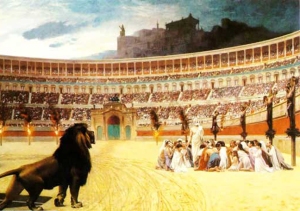 You may recall that in ancient Rome it was reputed that certain Emperors enjoyed feeding Christians to the lions. Actually the straight facts about that practice are a little difficult to discern. Roman games often employed animals or “beasts” as dramatic forms of death for prisoners or other hapless victims. The Romans also pitted beast against beast for curiosity’s sake.

Despite the prurient allure of such violent contests, the flair often wore off after a while. The website The Straight Dope addresses the problem thusly:

“You have to think the killing of animals might have eventually gotten dull as well — it’s estimated that 9,000 beasts were slain during the inaugural games of the Colosseum alone (possibly an exaggeration; another source says 3,500 during 26 events). Over time more exotic animals were introduced to hold the crowd’s interest: lions and panthers turned up in 186 BC, bears and elephants in 169 BC, hippos and crocodiles in 58 BC. Pompey brought rhinos to Rome; Caesar wowed ’em with giraffes. The ever-growing number and variety of animals required put a considerable burden on the supply chain. In his Natural History, Pliny the Elder tells us lions were originally hard to catch (the idea was to chase them into covered pits), but later it was discovered they could be subdued by throwing a cloak over their heads. Elephants were captured and tamed by beatings and starvation. A major source of animals was the Roman army, which had a special rank (venator immunis) for those in charge of animal procurement.”

So there’s always been this morbid (and often inhumane) fascination with killing exotic creatures in dramatic fashion. The very fact that the Roman army was chartered to bring home wild beasts for purposes of slaughter signifies the human capacity for cruelty and carnage.

Of course Christians were just one of the targets of torture and death for entertainment. People were killed to send political messages as well. Thousands of people from commoners to gladiators were sacrificed in the Colosseum and on thousands more nailed to raw stakes of wood by crucifixion.

But the raw thought of being tossed to lions that could tear apart flesh and break bones with massive teeth captured the imagination of history. So the concept of Christians being thrown to the lions has persisted as an iconic expression of political power out of control.

That also contributes in some way to the idea that killing a lion is considered an act of bravery in this world. Same goes for tigers or leopards or any number of giant cats. That leads some people to the idea that killing such creatures is a mark of personal virtue. In fact trophy hunters around the world pay tons of money for the opportunity to shoot lions, tigers and polar bears, to name a few favorite targets. Then they cut off the heads of their victims and save the pelts of these wild animals as souvenirs of their acts.

It is remarkable that throwing Christians to the lions is can be considered a sign of human depravity, yet killing lions for sport is considered by some a worthy use of time. 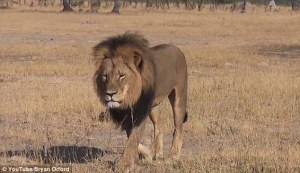 It is only when a lion such as Cecil is killed that the juncture of depravity and human ego are so clearly illustrated. The fact that the lion had a name and was a favorite of many visitors to a park has much to do with why the dentist who shot Cecil is being so reviled. Typically the human race needs to anthropomorphize animals in order to relate to their plight. Even gorilla genius Jane Goodall relied on a certain amount of name-calling to make her science appeal to the masses. The fact that Cecil had a human name brings the murder of this lion close to home.

Think about this for a moment: the work of Christian author and apologist C.S. Lewis included a seminal series of children’s books called the Chronicles of Narnia. The lead character in the books was a lion called Aslan who symbolized the virtues of none other than Jesus Christ. At one point in the books the lion gives himself over to a wild pack of beasts and a wicked Queen who tie down their victim and stab him to death on a slab of stone.

Aslan emerges as a spiritual influence for the rest of the book series. His presence for the children who live to become kings and queens in the land of Narnia is one of strength and virtue.

There is a parallel character to the death of one Cecil the Lion, whose presence in Africa represented the best of creation. The hunter that paid more than $50,000 for the right to shoot and kill a lion with a bow and arrow has been depicted as something of an evil wizard for his actions. His guides reputedly used trickery by hanging dead animals on their vehicle to lure Cecil out of the park and in range for a shot with a bow and arrow. But that did not kill the lion, and 40 hours later the beast was dispatched by means of a gun.

Some might consider this last act merciful. In fact many hunters fail to kill their targets on the first shot. No matter what weapons a person chooses to use in a hunt, there are drawbacks. One can fail by aim or by strength of ammunition. Good hunters try to answer these questions before they go out into the field. There are also those that contend these risks are the thrill of a good hunt. In the “us versus them” version of modern day hunting, it is the contention that animals such as Cecil are still dangerous enough to kill. In the minds of trophy hunters worldwide, that makes it a challenge to hunt them.

There remains the question as to whether trophy hunting is not simply an echo of the Roman era when wild animals were considered curiosities to be sacrificed for human entertainment.

As a kid I used guns to hunt some. We shot everything we could find. But the day that a sparrow was erased at close range by a shotgun made me wonder exactly what the purpose was. Then I picked up a stone one afternoon, and with deadly aim took out a robin off the top of a fencepost, killing it with one throw.

Walking over to the songbird, I leaned down and watched the last flicker of life go out of the bird’s eyes. That was far from a proud moment. The same held true when I was a somewhat tortured kid being teased by friends at school about being too skinny. I took out my anger by tossing stones at some feral rabbits in our neighbor’s yard and killed one of them too. It howled in pain at first. I was forced to put it out of its misery.

They say that torturing small animals is a sign of a disturbed and potentially dangerous mind. I am glad to say that the emotional wounds that drove me to hurt animals were ultimately healed.

I am not anti-hunting per se, and do not purport to link all hunters to disturbed states of mind. Certainly a day shooting pheasants in the fields of South Dakota may be a pleasant enough occupation. Those birds are a renewable resource for the most part. But I do question hunters that retreat to a fenced in range to shoot wild boars. The sport simply gets strange at that point.

And hunting where baiting is involved? Can’t really justify that very well either. Among birdwatchers it is even considered bad form to bait birds in for photgraphs.

Ultimately, one must consider seriously the position of creatures like lions in the scheme of creation. Certainly they once were fearsome and dangerous creatures and a threat to human beings. Now that we’ve essentially conquered the world and in many cases eradicated or reduced species of big cats to fragmented populations, there is no need to go around shooting them. 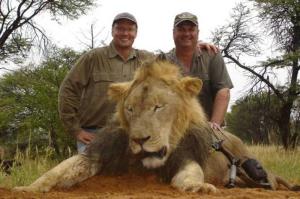 A bored dentist in Minnesota is no better in that respect than a bored soldier in the Roman army all those years ago. This idea that you require stimulation from killing other things in order to feel powerful and alive is antiquated, stupid and dumb.

And if you don’t believe me, you can ask Aslan. Yes, he’s a fictional creature who only symbolizes the figure of Christ in relation to mankind. Then again, Christ symbolizes the commitment to act in good conscience and with respect to the grace of God. In many respects, if you kill a lion for no good purpose other than to make yourself feel more gratified and powerful, you have put a bullet right through the heart of God. Going around killing lions is, therefore, a rather stupid and shortsighted thing to do. It does not enlighten or raise one’s conscience to accomplish such a feat.

We muse on the significance of Christians once being thrown to the lions and shudder at the thought of such violence. Yet we typically ignore the real meaning of the act. It’s not the lion’s fault, you see. They’re just doing what their instincts tell them to do. We human beings are supposed to know better.