Donald Trump is leading the polls among Republican candidates for President of the United States. The man needs no introduction of course. His bloviating style and grandiose gestures are all too familiar in the public sphere. Which makes him the perfect Republican candidate by today’s standards in the ostensibly conservative political party in America.

There’s really nothing conservative about Donald Trump at all. Not if you analyze it. But that’s precisely aligned with today’s Republican Party, which is comprised of politicians whose claims of fiscal responsibility, profound religiosity and commitment to smaller government and individual freedoms have all proven to be lies over the last 30 years.

In other words, the supposed priorities of conservative policies are, at their very heart, a bankrupted ideology of hypocrisy, euphemism and bully politics disguised as friendly attempts to represent the interests of a supposed minority. That would be the 1% of richest Americans.

And into this void walks Donald Trump, who almost perfectly represents the shallow and bankrupted ideology of so-called conservative politics.

It makes perfect sense. Trump built his empire, if you want to call it that, on a series of business bankruptcies. So he’s rather a good symbol for Republican policymaking, which demands that you walk away from past mistakes and never admit they happened. That was the entire philosophy of the Republican policy in the wake of a disastrous eight years under George W. Bush and Dick Cheney.

The economy was wrecked. Two Republican-led wars dragged on without a purpose or goal in the Middle East. Terrorism had spread and grown. The middle class was suffering. Policies of discrimination against women, minorities and Muslims, to name just a few, were being blindly rubber stamped by Republicans in both the House and Senate.

The country was a mess after Bush, but Republicans refused to accept any responsibility for their trashing of the economy or American foreign policy. Instead they flatly pledged to block or defeat any Obama initiative that came along. Once again, this was a morally and ethically bankrupt way for any political party to behave, but Republicans embraced the goal to make Obama a “one-term President,” to quote Mitch McConnell.

A mile wide and an inch deep 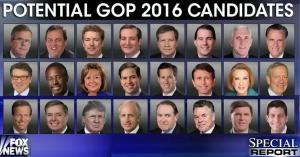 The Republican Party has proven itself to be a mile wide and an inch deep when it comes to the flow of American life and commerce. That’s why there are so many candidates necessary to cover all the shallow concepts upon which Republicans are set to run. There appears to be no emotional, intellectual or spiritual depth among any of these candidates. Several have criticized the Pope for actually advocating the actual teachings of Christ. Others like Bobby Jindal are playing strange racial games with their personal brand. Claiming allegiance with the Confederacy despite the birth heritage of his parents in India, Jindal demonstrates the shallowness by which appeals to Republican voters are being made.

The GOP is like a bad reality show with its strange assortment of half-realized characters running for President. We have the sick repeats like Rick Santorum and Rick Perry. Then

there are the cartoon characters like Chris Christie (what a perfect reality show name…) and the timeworn specter of Jeb Bush, who doesn’t even use his family name in his campaign logo. It’s just Jeb! because using the Bush name is a blanket admission that his father and his brother were both royal screwups at the job of President.

In walks The Donald

Against this backdrop of fools and scoundrels, Donald Trump steps forward like the point guard on a perpetually losing basketball team that still has a fan base of diehards. And we mean that term to be taken literally. The Republican fan base of elderly white men, who typically tend to be very angry and threatened by change, is now dying fast.

But Donald Trump is the phoenix of all phoenixes. He represents the eternal flame of anger that has driven the party whose entire political approach has been to discriminate, divide and drive deals behind the scenes (anyone recall the 2000 election and the Supreme Court) in order to gain and keep power. This is the most deeply respected tradition among all for the GOP. Win first, and worry about the details later. That’s how Mitt Romney ran, and fortunately lost. He almost ran again in 2016, then thought better of it. Pretending you have depth gets old after a while.

Happy to be shallow

Donald doesn’t even think he needs all that. His tone deaf slams of Mexican people proves that he cares not who he offends. Even GOP caretaker Reince Preibus is freaked out that Trump is so blatantly exposing the understanding among Republicans that the tried and true method of Republican election appeal is to pit social groups against one another by posing the idea that one group is a threat to another. That’s how Republicans win. There can be no other explanation.

It’s the dog-whistle racism that calls Republican bigots to the voting booth. It’s the idea that women must be controlled and put in their place, and that gays cannot possibly be allowed to have a seat at the table that drives patriarchal voters and the fearfullly religious to the polls. That’s the Republican base, as it were. A mile wide and an inch deep.

Trump exposes all that ugly truth like it was bare wire exposed to the sun for the first time. And as such, he’s the perfectly imperfect candidate for the GOP at this time in history. It has the GOP absolutely freaked out that Trump walked in and took 15% of the polling, higher than any other shallow candidate on the block. He’s making waves in the shallow Republican River, in other words.

So let’s just hope they go with The Donald. At least that would be both entertaining and honest. The rest of them are liars and power mongers disguised as candidates, so why pay attention to their so-called “debates” which will actually be held on a level that an 8th grade political science class could top.

But if there fans in the room, The Donald’s hair will stand up like a flag of desperation amongst those otherwise racially airbrushed and economically strafed political candidates. The Donald for President. At least he’s honest about his dishonesties.