The following conversation has been transcribed from the official records of the first phone call between Speaker of the House John Boehner and possible future probably Senate Majority Leader Mitch McConnell. The conversation took place two nights after the recent Republican landslide in the election.

Boehner: Hello Mitch? Are you there?

Boehner: Yes indeed my friend! We won! We won!

McConnell: I know. I’ve waited for this moment all my political life. We really put a stop to Obama this time. Just like I said when he was elected. Remember when I said that? Then I said the single most important goal was to stop Obama for a second term. And I know that didn’t happen but now we really stopped him didn’t we?! We stopped him.

McConnell: Yeah but now we can fix that. We can… what can we do?

Boehner: Impeach him. The House has been talking about that for years.

McConnell: Oh you guys talk about all kinds of things over there don’t you?

Boehner: We’re very good talkers. Now we’re going to be even better doers. Because we have you over in that Senate place. 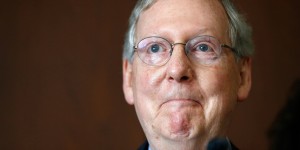 McConnell: Because we won! We really won!

Boehner: Mitch you have to stop saying that. You’ve got to act like you expected to win. That’s how winners behave.

McConnell: Yes. Not like you act whenever you lose, right? Because you tend to cry alot.

Boehner: I’m crying for the America that I love, Mitch.

McConnell: I know how you feel. I always looks like I’m about to cry. Well not cry actually. My face just naturally does this sort of pouty thing. I think it’s because we live south of the Mason Dixon line that things about America make us cry? What do you think?

Boehner: So what’s the agenda over there in the Senate, Mitch? What do you want to accomplish?

Boehner: Okay, sounds good. How do we do that?

Boehner: Yes, I agree. He’s had his way with this country long enough. But then what?

McConnell: Let’s….kill Obamacare! Kill kill kill kill kill! We’ll hire the NRA if we have to. We’ll shoot Obamacare full of holes and leave its smoking carcass on the steps of the White House!

McConnell: It isn’t? Why do we call it Obamacare then? Isn’t that why everyone hates it? Because Obama is bad for America? He can’t possibly care for anyone can he? Other than himself and his socialist buddies?

Boehner: Actually there are a few things about Obamacare that people actually like. But the Supreme Court is probably going to get together and fix that for us before we have to pass any laws about it.

McConnell: Yeah yeah yeah! I love that John Roberts and that Scalia guy. What’s his name. Antonin? Yeah. I hear he likes to shoot things too.

Boehner: Are you talking about Dick Cheney, Mitch? He’s the one who shot his hunting partner in the face.

McConnell: Let’s take Obama hunting. Then we could shoot him in the face! People would love that. Think of the headlines. “Republican Congressman accidentally shoots Obama in the face!” I bet we’d make the headlines on Fox News!

Boehner: All we have to do is call them if we want anything on the news, Mitch. Didn’t you get that memo back in 2000?

Boehner: The one that said we get to write their talking points.

McConnell: They sent me a different memo. They said they’d give the talking points to me! Well whatever. It works either way I guess.

Boehner: Speaking of which. I just got a call from the US Chamber of Commerce. They’re calling in the chips on getting all these Republicans elected. They want a real pro-business agenda before the 2016 election.

Boehner: Well we won the mid-terms. Now we have to get a Republican President elected. That would give us a Republican White House, Congress, Senate and the Supreme Court. What do you call that, a quadfecta?

McConnell: You forgot the Constitution. Don’t we own that too?

Boehner: The Constitution is a book of laws, Mitch. It’s not an arm of government.

McConnell: Well we have to stop this goddamned Obama. He’s the devil I tell you.

Boehner: That’s what Pat Robertson tells us anyway. It makes me sad to watch the devil get so much power in America.

McConnell: How can we get our religious friends involved. What the hell happened to that Santorum guy anyway?

Boehner: He’s been in psychotherapy ever since that Dan Savage guy named some ass foam after him.

McConnell: But he’s a Catholic! He’s stronger than that isn’t he? Let’s call the Pope! Let’s get this Santorum guy working for our side again!

Boehner: Didn’t you get the other memo last week? It looks like the Pope isn’t really on our side. He believes in evolution, thinks economic justice is the responsibility of government and says that being gay isn’t all that bad. He’s really quite a socialist.

McConnell: Wait till Jesus hears about this!

McConnell: Jesus was a Republican! He helped us win win win! We prayed to God that we would win and we did! We won we won we won! 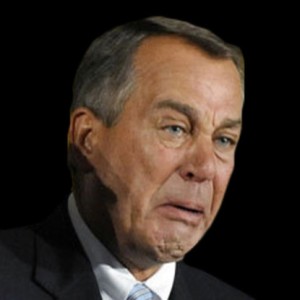 Boehner: Now I am gonna cry. It’s true isn’t it? Jesus really is on our side!

McConnell: If we grew beards we could all be like Jesus! Jesus, that would be something wouldn’t it John?

Boehner: I could be John the Baptist to your Jesus Christ! Plus, I think the voters already know we have a good relationship with Jesus, Mitch. Polls show that the same 30% who don’t believe in evolution vote in lockstep with Conservative Republicans. That shows that Conservatives are winning. Three out of ten people you see walking down the street do not believe in evolution. Our education policies are working!

Boehner: There are a few Democrats left. But most of them are Unitarian Universalists. They believe in anything. So we’ll get them sooner or later too.

McConnell: What about the kids? Do we have the kids on our side?

McConnell: That’s okay. We control their student loans. We’ll jack those rates up to 20% and make them our Republican slaves. They won’t be able to afford to go to the polls. That will fix them. They’re the ones who voted for Obama in the first place. But we fixed them, din’t we Johnny? Because we won! We really won.

Boehner: So next Tuesday we take down Social Security, Medicare and Medicaid. Thursday we’ll nail Obamacare if they Supreme Court can’t do their job and then we’ll rub out the minimum wage so that people can get back to work just like Michelle Bachmann said. I miss that girl, don’t you?

McConnell: Did you hear her family got in a big fight?

Boehner: That was Sarah Palin’s family John. But just think! She could have been the Vice President, or even the President if McCain had kicked. Wouldn’t that have been something?

McConnell: It almost makes you want to cry.

Boehner: Almost. But I’m a little dehydrated. So don’t make me do that.

McConnell: Well, let’s drink to our success then! And see you on the other side of Obama. Let’s go get him!