An apparently pissed off Mitt Romney recently wrote an opinion piece about military spending in the PERPECTIVE section of the Chicago Tribune.

When a seemingly devout believer in conservative philosophy finally builds up pressure inside his head from keeping his mouth shut fro a few months, it can be fun to see what pops out when the bubble bursts.

So it is that we find Mitt Romney giving his two cents in the Chicago Tribune PERSPECTIVE section in a Monday edition of the newspaper. The opinion piece, titled “What’s with Obama’s moves to slash the military?” throws around the principle concerns of most latter-day conservatives, which are worry and fear about our position in the world. He saves a few final gripes about government spending for last.

He goes on to scold President Obama for his apparent inability to conceive or understand the nature and scale of these threats. Then Romney attempts the Ol’ Consrvative 1-2 punch by quoting Obama’s own words out of context to make him appear foolish, “Things are much less dangerous now than they were 20 years ago, 25 years ago or 30 years ago.”

But that’s not all that Obama said, for he spoke more on the matter as quoted on the Pundit Press website,” President Obama maintains that the “truth of the matter” is the “world has always been messy. In part, we’re just noticing now because of social media and our capacity to see in intimate detail the hardships that people are going through.”

Of course talk like this drives conservatives absolutely crazy because they’ve never met a crisis they could not either predict or prophesy. Well, except for 9/11 and the whole unplanned Bush-driven debacle that once was the Iraq War and now has transmogrified into a whole bunch of really pissed-off Islamic militants who are ramping up the push for a worldwide Islamic state.

Even Romney admits in his piece that “failures of imagination led to tragedy 13 years ago.” You think? How about failures to listen to simple, basic warnings about terrorist attacks and an ugly motivation to impose America’s oligarchic will on the rest of the world? Sounds a bit more like the truth, Mr. Romney. Your side screwed up and then made matters much worse by privatizing billions in military operations, sanctioned torture and conducted the entire escapade off limits from the federal budget. That’s right, Mitt, your party did not even want to be held accountable for trying to pay their way to a forced Armageddon in the Middle East to fulfill the biblical wishes of all those Red Heifer zealots dying for a chance to see Jesus come back to earth. Yes, there really were religious motivations at work in all that.

But perhaps the Mormon faith does not buy End Times theology after all? So the Right wing has a tough time agreeing on a number of things, it seems. And these are just some of the reasons why those of us suspicious about current levels of military spending feel it’s always right to force our military to be accountable for its spending.

Yet you, Mitt Romney, seem much more concerned with slashing domestic spending than military spending. “The arguments for shrinking our military fall aside to reveal the real reason for the cut: Politicians, and many of the people who elect them, want to keep up spending here at home.”

Yes what a terrible idea it would be to invest in in the health, education, jobs and infrastructure of America! We must suppose you have a much better idea on how to make America better? Or is it the same line Bush gave back in 2000? “Entitlements and programs are putting pressure on the federal budget: We either cut our defense, or we cut spending on ourselves. That, or raise our taxes.”

Never mind that raising the taxes on the richest Americans has led to prosperity over and over again in our nation’s history,  and that nearly every major cut on personal and corporate income taxes has led the country into recession or depression. Reagan. Bush I. Bush II. The pattern repeats itself.

Meanwhile history and great presidents of the past give us insight on how to understand that we we need to be wise with how we fund our military lest it bankrupt the nation both fiscally and morally.

For evidence, let us take a look at what a certain General (and President) Dwight D. Eisenhower (R) once said, “We now stand ten years past the midpoint of a century that has witnessed four major wars among great nations. Three of these involved our own country. Despite these holocausts America is today the strongest, the most influential and most productive nation in the world. Understandably proud of this pre-eminence, we yet realize that America’s leadership and prestige depend, not merely upon our unmatched material progress, riches and military strength, but on how we use our power in the interests of world peace and human betterment.”

His words encourage us to be patient and strong in our choices when it comes to military use and aggression. Eisenhower went on to explain why funding of the military was such a topic of importance:

“In the councils of government, we must guard against the acquisition of unwarranted influence, whether sought or unsought, by the military/industrial complex. The potential for the disastrous rise of misplaced power exists and will persist.

We must never let the weight of this combination endanger our liberties or democratic processes. We should take nothing for granted. Only an alert and knowledgeable citizenry can compel the proper meshing of the huge industrial and military machinery of defense with our peaceful methods and goals, so that security and liberty may prosper together.”

And there you have it Mitt. President Obama has not said much of any different from what Dwight D. Eisenhower said back during the days when communism was deemed a threat to our nation’s security. What we need to do is plan wisely, invest in smart military plans and options, take care to maintain domestic spending as a balance of prosperity and pay attention to our global responsibility to allies and enemies.”

From the sound of your words in comparison to those of President Dwight D. Eisenhower and our current President Barack Obama, those of us who appreciate consideration as a wise strategy for war are glad for men like these, and not so glad of men seeking to undermine their patient response to threats rather than cowboy dreams and bitter condemnations by Presidents and Vice Presidents who can’t see past their own ideology when it comes to world affairs and our military. 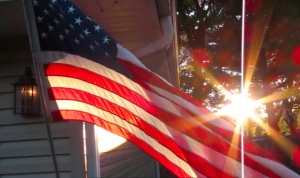