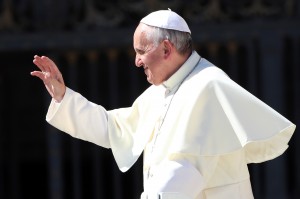 Pope Francis seems to be saying to the world, “Hold on a moment. I’ve got something to say…”

With the advent of a new Pope, all of Catholicdom held its breath a few months ago. Now that Pope Francis is taking names and kicking ass on practical and theological issues, even people outside the Catholic faith are breathing a sigh of relief that it’s not just business as usual in the biggest Christian organization on earth.

Of course Catholicism makes some legitimate claims to the origins and sustenance of Christianity as a whole. The whole Roman Catholic history serves as one big pipeline back to the days when early Christians first struggled for survival in the face of political oppression, then duked it out over what the faith should really mean and finally got the stamp of approval from Constantine and a success line of rulers and kings all the way through to the modern age.

But along the way, Catholicism got a little cocky and a little arch in its practices. Catholics persecuted a fair share of people over the ages, and got a few things wrong about the cosmos too. Remember Copernicus and Galileo? Neither were accepted as practical authorities on cosmological matters.

A few Crusades and an Inquisition or two later, Catholicism grew into a faith that tolerated little dissent. It took one of their own priests, Martin Luther, to bust open the bible and bring back the true meaning of faith through grace to the Christian world.

The gates of Catholicism have still slammed shut on some issues. Recent popes did little to get the rampant issue of priestly abuse of children under control.

Then along comes Pope Francis. What a surprise. He started off with an equivocal but intriguing statement about homosexuality (“Who am I to judge?) and proceeded to demand that his own hierarchy live the faith by dumping a higher-up in the faith for living high on the Christian hog.

The general message of Pope Francis has been something Jesus might have said. “Don’t be like the Pharisees.”

In other words, Pope Francis is calling all Catholics to consider what their faith is really all about. Caring for the poor. Looking out for the disadvantaged.

Hell, Pope Francis even has the guts to throw a gut-check to the primary religion in America, which is capitalism.

Here’s what he said:

“Just as the commandment “Thou shalt not kill” sets a clear limit in order to safeguard the value of human life, today we also have to say “thou shalt not” to an economy of exclusion and inequality. Such an economy kills. How can it be that it is not a news item when an elderly homeless person dies of exposure, but it is news when the stock market loses two points? This is a case of exclusion. Can we continue to stand by when food is thrown away while people are starving? This is a case of inequality. Today everything comes under the laws of competition and the survival of the fittest, where the powerful feed upon the powerless. As a consequence, masses of people find themselves excluded and marginalized: without work, without possibilities, without any means of escape.”

It is somewhat stunning as well to see the term “survival of the fittest” daringly inserted into a religious argument for social justice. Do you get what that means? Pope Francis essentially acknowledges the practical truth of evolution with such a statement. In that regard his slap at the hindquarters of capitalism is also a slap in the face to evangelicals who can’t come to grips with the science that drives our understanding of the world.

The Pope just yanked the respective chains of economic and religious zealots. Do you get what’s going on here.

The time has come for a new Reformation. The time has come to question all the dogma and complacency driving our current religious dialogue. The Pope is using a mixed martial arts approach to theological discourse to challenge those who think they can get away with the same stupid shit they’ve been pulling for the last 30 years.

His real statement is this: “Your time is up. You’ve had your say. The world is ready for a brand new day. Get out of the way.”

Hurrah for Pope Francis. He may not be perfect, and he would be the first it seems to admit that. But he may be what Catholicism needs, and by proxy the rest of the world might take notice.