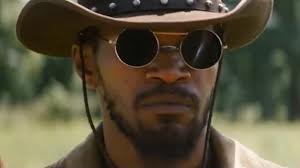 The Academy Award-winning movie Django Unchained, written and directed by the always violent mind of Quentin Tarentino, has a simple plot line. Slave gets rescued by a bounty hunter who needs him to identify some bad guys. Slave learns ways of bounty-hunting and takes it to a naturally new level. Slave earns possible freedom for himself and the love of his life if he helps pull off a ruse with a sickeningly manipulative and violent Southern plantation owner. Things go awry and people get shot. Things blow up. And Django, well, we wouldn’t want to spoil the ending. 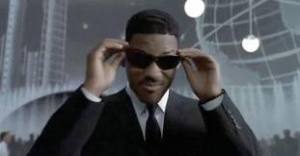 “The difference between you and me? I make this look good.”

The plotline of Django Unchained closely resembles another movie in which a black character emerges as an eminently good student. That movie would be Men In Black, with Will Smith and Tommy Lee Jones. One of the key similarities is that the Jamie Foxx character in Django and the Will Smith character in MIB take their roles seriously with a compelling flair. I paraphrase, but the Smith character states, upon putting on the MIB suit, “The difference between you and me? I make this look good.”

The parallels are interesting because one movie is about the very earthly fact of slavery as a scourge upon the American conscience, while the MIB series is all about the fact that aliens live on earth without 99.99% of the population knowing. Even Dennis Rodman, Elvis and Sylvestor Stallone are implicated as aliens in the plot.

It is interesting to realize that one movie, set in the past, points out that American history is not so exceptional as it is sordid. While the other movie, set in the present, lampoons the notion that our government and our culture are somehow superior by nature.

In other words (and other worlds) American Exeptionalism is a literal and figurative bunch of hooey.

In fact what you realize upon comparing these two movies is that America is exceptional despite its supposed superior foundations and conservatively interpreted Constitution. The only thing that has made America great over the years is a deep willingness in its most liberal citizens to an ultimate sense of justice. Liberalism, not exceptionalism, has been the true expression of America’s finest values.

Django Unchained and Men In Black both illustrate that America’s black citizens have had to be exceptional models of patience and ingenuity with an almost magic flair for perseverance and creativity. The object of Django’s affections and the entire goal of the venture is to rescue his enslaved wife, a German-speaking woman named Brunhilde, which happens to link with the German legend of overcoming seemingly insurpassable odds in the name of love.

What better characterization of black culture can there be, except that it somehow must be defined by a legend from a primarily white culture. It is the ugly fact that both movies pair an initially clueless black character with an obvious savvy white character to educate an unleash the powers of the black man. And ultimately, the black woman.

That’s the problem with the attitude toward equality of black people. It still needs nurturing somehow? Not at all, in truth. Nor does the equality of gays in America need a mentor. Or women. Or Mexican people. Immigrants of any kind. Yet that is our national narrative in some respect. The melting pot somehow harkens back to a white chef.

And that is the sad underlying fact of so-called American Exceptionalism. That whites are the true core and fiber of American success. It held that blacks could fight in World War II and still come home to a highly segregated society where equality did not exist. And it still held that the 1960s were the ruination of a society with all the liberation of social and sexual mores. It holds that a certain religion has driven the God-given, blessed existence of America.

American Exceptionalism then held forth that 9/11 was the greatest affront, an event that gave us permission to do whatever we wanted in the world, even to torture terror suspects in so-called “black sites” around the world. Do you start to see it all circle back into a cesspool of “exceptionalism” that is exceptional only in its arrogance and supposition that Americans can do no wrong. Not even when we enslave. Torture. Discriminate. Oppress. Even legislate these same evil practices into law. And in today’s culture! Years removed, we should be, from the need to use our government for religious and social prejudices. Yet some persist, denying basic civil rights and running political parties that make very public attempts to suppress the vote of minorities so that they can remain in power. And then complain about why people are not attracted to their “party.” Some party it is that cares only for its own right to rule without granting even basic human rights, denying health care coverage to millions under the so-called free market laws that also discriminate by conveying unfair economic advantage to those already in power.

And what of the supposed unnecessary or gratuitous violence depicted in Django Unchained, and to a certain extent, even in Men In Black. Well, when you consider that our gun laws have led to a culture where more Americans have been killed––or killed themselves––through gun violence than all the soldiers that have died in our combined wars over the years, there is nothing gratuitous about the violence in Django Unchained at all. At least the movies showed those who got shot writhing in pain and cursing desperately. That’s the reality we seldom see in the movies. Gun violence maims and kills, and that is celebrated in video games that splatter brains and even the 5:00 news, where it leads when it bleeds.

It’s about time we figured out that the glossed up image of America as a free society is still an illusion. There are people living in chains to this day.

You can hear the fear in the voices of those who want to keep it that way. The increasingly shrill call by Rush Limbaugh to suppress women’s rights, and the barely disguised racism he shows toward President Barack Obama, to whom Limbaugh refers as “The Magic Negro.”

That is exactly how dismissively the character played by Leonardo di Caprio speaks of black people in the movie Django Unchained. He speaks of the fact that only 1 in 10,000 “niggers” is exceptional, worthy of his respect in any way. The rest he sees fit to serve to the murderous dogs who tear apart a runaway slave in retribution for costing the di Caprio character his “investment” of $500.

If that’s still the value of human life in the eyes of some who portend to lead America, then we’ve got enormous problems of exceptionalism that cannot be wished away by claims of patriotism or supposed righteousness. That kind of exceptionalism is the most disgusting form of hubris imaginable.

It has taken years and decades and centuries of liberal salvation to bring America somewhat out of its own pit of racial selfishness and greed. Still we suppress minorities, and still we crash the economy through lack of jurisprudence so that the wealthy can gain more for their appetites.

We’ve still got to make up our minds whether the nation is a plantation or reasonable place to live for the so-called “aliens” among us. The arc between Django Unchained and Men In Black has a lot to teach us if we care to learn the allegorical lesson.

Falling short of that enlightenment would only be exceptionally stupid.