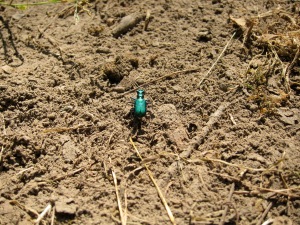 Drought over much of America has parched the soil

The problem Christians face in consideration of natural disasters such as drought, floods, tsunamis, earthquakes, tornadoes and fires is that Christianity itself seems conflicted about so-called “acts of God.”

Even insurance companies bent on actuarial accuracy have been known to use the phrase “act of God” to describe weather and other natural phenomena gone out of control.

The current challenge over much of North America is drought. It appears that among all dangerous results of climactic conditions, drought may be the most pernicious of all when it comes to the ability of the human race to address its impact on agriculture and other enterprise.

We take for granted that it will rain sooner or later. But in an economy teetering from the effects of human foul play and political stupidity, a natural disaster such as drought can prove to be a tipping point. The Depression of the 1930s and the Dust Bowl proved that point. We apparently have not learned much from the experience. Industrialized farming, while something of a miraculous invention, still cannot make up for the fact of no rain. Crops still need water, and irrigation cannot currently compensate for millions of acres of parched corn and beans.

So where is God in all this? Surely there are plenty of farmers and perhaps a few corn and bean speculators praying for rain so that some sort of crop emerges from the summer of 2012. Yet there may be just as many commodity speculators praying against rain so that their margins or profits or product estimates will prove true so that they can somehow corner the market and get rich as royal thieves.

Does God listen to their prayers as well? Does God answer prayers for wealth, especially ill-begotten wealth that would be the result of human suffering?

If we take the world at face value we might surmise that God does answer the prayers of the evil as well as the good. With wealth rising to the top of American society at previously unseen rates, one thinks of Bible passages such as these: “Will not all of them taunt him with ridicule and scorn, saying, “‘Woe to him who piles up stolen goods and makes himself wealthy by extortion! How long must this go on?” Habakkuk 2:5-7.

Well, woe is relative, and the rich sometimes don’t seem to feel it, or much of anything with regards to other human beings. They even suppose to feel favored by God.

While much of middle-class America has been struggling along since the economy ratcheted up to a crash under the watch of George W. Bush, the wealthy largely rebounded from stock market losses and are doing just fine, thank you. So where is God’s justice in these circumstances?

It has always been that way. And it will always be that way. Achieving justice in this world often requires much effort and human enterprise, for evil in this world is industrious, greedy and pathologically uncaring. That certainly does not mean that all wealthy people are evil. But it does mean that those who are can do great harm.

But nature can be just as capricious. The world is designed, if you want to call it that, to operate on random forces that include natural disasters and even evolutionary twists of fate. So the drought of 2012 is neither unimaginable to God, or unexpected. Some people automatically throw stones at the nation for its supposed sins, accusing America of “tolerating” a list of ostensibly evil activities ranging from abortion to homosexuality, promiscuity to lack of church attendance. Yet it’s funny how seldom those same prophets seem to admonish America for its inequality in wealth, its obsession with violence and its disenfranchisement of the needy and poor. Those themes are much more prevalent in the Bible, yet the crowd that likes to say that God is punishing America for its sins almost always ignores the sins of power. The reason? Too often the supposed prophets are in political alliance with the rich and powerful, thus compromising their ability to speak for God.

It seems that same bible-thumping crowd likes to deny the random fact of evolution, preferring to insist that God is in control of every moment and event in time, like some OCD control freak of a deity. But that worldview does not square with the reality of free will in the world, or the fact that human beings are free to choose in belief in God and Christ. God may indeed be “in control,” but we make our own choices about what elements of God’s universe we seek to embrace, evil or good.

So we persist in a dysfunctional relationship with the influence of God in the world, throwing faith at the idea that it will someday rain while denying that it might be our own, human activities that could be contributing to the current drought.

Indeed, global climate change is the product of human beings burning fossil fuels at alarming rates. Yet the people who favor a nation bowing down to the interests of the very wealthy, and industrialists to boot, insist that holding polluters accountable will harm our economy. How ironic. It’s almost like they can’t see the forest for the trees. Hence the organic symbolism is doubly lost.

That is so narrow-minded as to deny the very existence of God, who the Bible says favors the actions of the just and prudent among us.

So these are the lessons of Drought, God and Human Enterprise. Without recognizing the consequences of our own behavior, God cannot (and will not) help us solve any of the problems we face, be they natural or manmade disasters. Our preparedness and humility in the face of such circumstances may help us attain the collaboration and response necessary to prevent the inevitable natural disaster from becoming fatal to ourselves. If you read the Bible carefully, that is most of what God has done for the human race through great leaders.

God despises however, those who act in His name for gain in personal wealth and power, especially through extortion, calculated speculation and manipulation of people through deceptive words. One cannot help but realize that an evil game is being played by people who deny the massive evidence from science that global warming is real, and that natural disasters, including drought, may be worsened by our own aggressive folly. That is true also of pollution by pesticides, heavy metals, atmospheric degradation and even genetically modified crops and animals. Simply put: We’re messing around for profit and in the process may be losing our grip, and our souls.