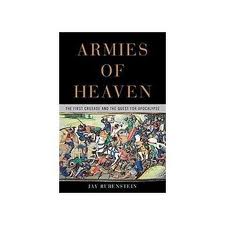 The new book Armies of Heaven, The First Crusade and the Quest of Apocalypse (Basic Books, 2011) is authored by Jay Rubenstein, who takes pains at the end of his work to caution readers that applying the lessons of 1000 years ago to today is tricky business. “From our vantage point, with nine centuries of hindsight, it is tempting to look smugly or dismissively at the dreams and nightmares born of the First Crusade. The expected Apocalpyse, after all, didn’t happen.”

That is true. But the book reveals many other truths about wars of religion and how they can radically change our perspective on what constitutes humanity. And these revelations are just as important.

We learn that several hundred thousand Christian warriors marched from all points in Western Europe to converge in a mission to take back Jerusalem from their perceived enemies, the Muslims or Saracens. Who frankly had done a bit of murderous mischief, torture and taunting of Christian pilgrims to inflame Christian hatred.

On the way, the combined Christian armies led by lords and holy men of various social and economic status first fought battles with people who also happened to be Christians in regions near Greece. Indeed, the First Crusaders seemed willing to fight anyone who stood in their way. The First Crusade pretty much behaved like a column of army ants, devouring anything in its path.

It was a stunning enterprise, traveling more than 2000 miles, buying, selling and raiding their way along the road in a holy war that produced the deaths of thousands of people on the way to the Jerusalem. The process took years, involved many genocides, brutal sieges and greedy detours along the way. The avarice of military leaders interfered with the perceived mission of the Crusade. Prophets and priests who accompanied the armies became so desperate to get the Crusade back on track they even fabricated holy artifacts to trick military leaders into doing their bidding.

But most of all, the armies killed and killed some more, wiping out cities and entire populations of people in battles where literal rivers of blood flowed down the streets and body parts formed dams in the rivers and streams. Horrid decapitations and tortures became part of the psychological warfare employed by Christians to threaten the Saracens, another word for people of Muslim faith who occupied much of the territory east of Italy all the way to Egypt. The other critical talent of Crusade leadership was political wrangling. In some cases it saved lives. In others it simply delayed the inevitable wars for territory and plunder. In which case no one was spared. Not women and children. Yet they marched on.

The First Crusaders caught some lucky breaks. Took some wild military risks. Created what appeared to be miracles of God on the battlefield. Alternately they preyed to heaven even as they were forced to feast on human flesh, depending how their fortunes turned. The Crusaders once conquered the city of Antioch only to be besieged by another Army a day later. But ultimately they charged out of the city walls in desperation and caught a seemingly superior army by surprise, turning tables on its arrogant leader and turing the battlefield into a massacre even though many of the Christian warriors were astride donkeys and mules because their military horses had either died in battle or been eaten for food.

Rubenstein’s painstaking, brilliant work chronicles the religious fervor driving it all. To many of the First Crusaders, repentance meant turning to Christ to beg for victory, then turning around to slaughter the opponent, dismember and maim the dead. The Crusaders never seem to have read the part of the Bible where God denies King David the opportunity to build a house in His honor because David had too much blood on his hands.

In fact the book Armies of Heaven shows Christians 1000 years ago conveniently forgotting a lot of the bible in order to pursue their politically religious and economic passions. Many military leaders became obsessed with plunder, and even poor pilgrims who followed the armies to Jerusalem would sometimes disembowel enemy dead in hopes of finding gold in their guts. Generals bickered over who owned rights to the cities they conquered. Christian princes, having conquered cities, often turned to fighting over individual towers, houses and neighborhoods, promising safety to residents cowering in fear, then killing them wholesale when the doors were flung open. Greed knew no bounds on the First Crusade.

Even when the Christians conquered Jerusalem the biggest question was who they should name to be king. In fact the matter was never completely settled. One of the military leaders who was offered the job refused to accept it, secretly hoping his rivals would admire his humility and name him king anyway. They didn’t. The First Crusade accomplished its mission only to mill around Jerusalem like the hapless knights in the movie Monty Python and the Holy Grail.

But we should not be too quick to judge, Rubenstein maintains. The fact that the Apocalpyse was not brought on by the conquering of Jerusalem did come as a disappointment to the First Crusade, which left suddenly aimless and often jealous military rivals to wander back to Europe wondering what the hell really happened?

What the First Crusade really indeed illustrates is that the human propensity for greed and violence supercedes even the most holy objectives. The bible warns us of that. But people are quick to credit God for their luck in war, yet not quick enough to blame their supposed faith in God and Christ when it is used to justify the most base human behaviors imaginable. And so it goes.

The book Armies of Heaven ends with a chapter titled The Never-Ending Apocalpyse. Its main contention is that the atrocities committed during the holy wars of the First Crusade essentially brought back the genocidal traditions of the Old Testament in a scale of murderous behavior that really did border on the Apocalpyse. Some Crusaders did believe at points during the journey they were living through the first phases of the Revelation narrative and the prophecies of John. And who can blame them? They brought the madness on themselves.

But here we are a thousand years later and the utterances of fundamental Christians bear the same ilk and fervor as the First Crusade. Many seem to still want to bring on the apocalpyse. It’s pathetic, really, that Christianity cannot seem to grow up and out of its most murderous traditions. The literalistic interpretations of scripture that drove the First Crusade to first murder Jewish people in Western Europe and then lash out against Muslims in the Middle East continues to stoke the murderous hearts of zealots and theocrats today. The American war in Iraq was reflective of this New Crusade, as is the so-called War on Terror. And just like a thousand years ago, anyone willing to question the fixations of the new crusaders is called naive and anti-religious. It’s a horrid joke in the hands of history.

Whether these new apocalpytic journeys are justified or simply the product of our own teetering fervor for fighting old battles we may apparently never know. But the years keep rolling by, and the modern crusaders keep on looking east, eager for the apocalyptic kill. And if not that, then the plunder.