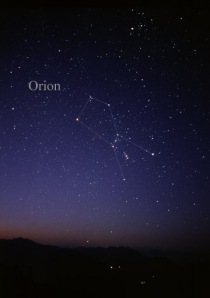 Dating back 6000 years to some of the earliest records of human civilization, cultures around the world gave name to constellations of stars in the sky. Many of these are still used by modern cultures to describe star patterns.

At one point these star patterns were considered truly divine representations of gods, goddesses or creatures that figured in the all-important mythology of people seeking cultural narrative.

Of all the constellations there is probably none more potentially significant, universal or transferable than that of Orion. The pattern of stars in the constellation Orion can be seen around the world. With its “belt” of stars across the center of the constellation, and arms and legs extended, Orion lends itself to all manner of interpretation.

For example, In ancient Egypt this constellation was known as Osiris, a character who upon being killed by an evil brother rose again to live immortal among the stars. That story hews closely to the character of Jesus Christ, who the Bible says was betrayed by one of his brother disciples only to rise again and live on it heaven. 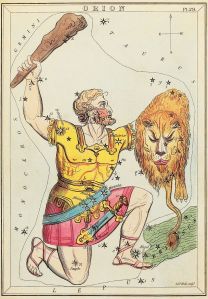 It is an interesting thing to consider that so many heritages seem to converge in symbolic ways. Yet there is also supposedly an advanced worldview that dismisses the constellations as having any real divine significance. Modern culture has largely dismissed the heritage of Greek, Roman, Egyptian, Asian or Scandinavian gods as “pagan” religions.

At least part of the reason we no longer abide by constellations as gods is that we recognize that constellations are not at all what they seem to the human eye. They do not exist on some flat or equal plane in space. They certainly don’t hang or conveniently travel across the so-called “dome” of heaven.

Space is an eternal, infinite place. The stars we see above our heads are literally billions of miles apart. They only appear to be fixed in space and time because our comprehension from this pinprick of a planet makes it hard if not  impossible to perceive constellations as anything other than an absolute truth. Of course many people like the predictability and familiarity of the Big Dipper hanging in the night sky. It is recognizable, constant and real.

Yet the Big Dipper is not a “thing”. It is nothing but our imaginations at work trying to find symbolism and constancy in the universe. Those stars in the Big Dipper are so far apart no human being could traverse them in a million lifetimes.

For a long time in history the stars in the Big Dipper and Orion and Cygnus and hundreds of other constellations played an important role in human understanding of the universe. At the time when constellations such as Orion were recorded by early humans on rock face carvings 36 to 38,000 years ago, science was obviously not yet evolved enough to determine the real position of earth in time and space.

So we went with what we knew, and it served the human race well to establish guidelines for behavior based on ethical and moral parables in which the gods depicted in constellations sometimes played a part. They were there for everyone to see, after all. There was no escaping the gaze and wonder of gods staring down at us from above.

Eventually that notion of god above congealed into a singular deity called God or Yahweh or Jehovah. Even that singular god shares divinity with other religions such as the Muslim faith, whose early heroes include some of the same characters as the Bible. These were scriptural constellations of a sort. They share the same patterns and in some cases, the same values or attributes.

For some people, those scriptural constellations are quite literal in their conception and their place in history. For those believers, faith is fixed in the sky or the mind much like a constellation. It gives them assurance that their faith is anchored in the foundations of the universe. Their god still hangs above and their Bible or Koran is the constellation of wisdom. It shall not be moved. For those believers, accepting anything other than a literal interpretation of truth causes much consternation.

What good are they?

It requires so much thinking to conceive the stars outside their constellations. They seem so unanchored and random in that mode. What good are stars to us if they just hang out there in the universe and do not reflect the patterns we impose on them to make ourselves feel relevant and fixed in the center of the universe?

There are people whose conception of the Bible is so literal they cannot accept what science has to say about the universe in contrast to what their religion tells them is true. They would rather believe in the fixed constellation of truth handed them by literalism than to contend with the messy, miraculous truth of life in a universe evolved from chaos and subject to laws of gravity, time and evolution that transcend the narrow worldview of constellations and consternations.

Because what it all comes down to is the fear that God will not love us if we open our minds to the truth. But the gods of constellations seem to have departed once the real kingdom of God here on earth was revealed. The greatest constellation of all is love. It is what drives us to appreciate the grace of our existence in such a universe. We don’t need a pattern of stars in the sky or an outmoded take on the bible that contradicts itself in its supposed literalism and inerrancy.

You can feel free to live, to move around and find truth in the organic symbolism of scripture and not get tied into a harmful mythology that says outmoded laws and wrathful gods rule our world. We’re supposed to be brighter than that. Even Orion can tell you that.